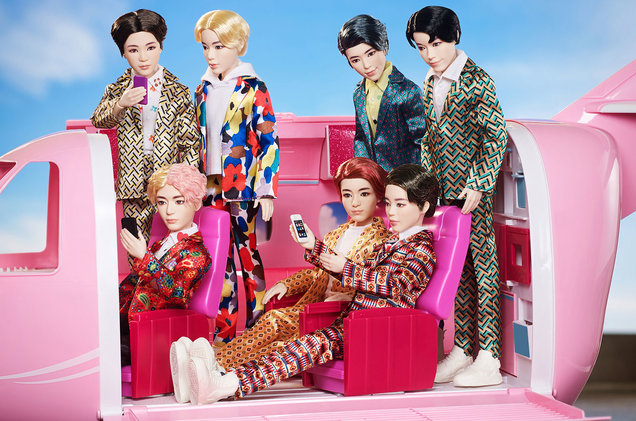 The BTS Mattel dolls are upon us … or nearly. I guess some people have already gotten theirs, but if you ordered from Amazon and some other retailers in the U.S., they’ll start arriving today. This may shock people who read my original reaction to the designs, but I didn’t immediately place an order when the dolls started appearing in online marketplaces. Still, that didn’t stop me from pursuing product photos, and boy, was I in for a surprise: They’re different from the original photos Mattel dropped a couple months ago!

I mean, they’re not that different, but changes were definitely made. Apparently, Mattel recognized the potent cocktail of fear, disgust and confusion that the original photos elicited, and the company decided to take action. In honor of the dolls’ release, let’s see if any of the changes made are actual improvements.

What’s different: In the hair, the wing action at the sides has definitely been toned down. It’s still there, but it looks more like an actual human being’s bangs now. The color seems a little better, too, but that might be thanks to better lighting. It still doesn’t quite match—Jin’s hair seems to have warmer undertones—but it definitely looks like a nicer blonde than the original photos. Facewise, the nose seems to have more dimension, but that again could be thanks to lighting.

What’s the same: The face seems pretty similar to what is was (i.e., not that much like Jin). The eyes still strike me as wrong, and the brows could be bolder.

Better or worse: Definitely better. I thought Jin was the worst of the original line-up, and well, it’s still not an amazing likeness, but the doll looks more like a person now.

What’s different: There is so much less of that awful hair! No doubt, it’s a better length, but let’s face it, the hair still looks pretty bad.

What’s the same: The face seems to be the same, which makes sense. It’s basically impossible for them to change the face molds for any of the dolls this late in the game, but I guess there could be paint differences. I feel like the face is somehow less recognizable with the new hair. Was the hair hiding how nondescript the face is? Am I the only one who thinks it looks a little wide now?

Better or worse: Better. The crimped, heavily moussed, ‘90s boy band look has been tamed to something approaching acceptable.

What’s different: Mary Poppins who? Okay, Mary is still kind of apparent in the hairstyling, but there is certainly less volume at the sides. Therefore, Suga looks less like a turn-of-the-century nanny. Small victories.

What’s the same: The awkward middle part endures even with the loss of volume.

Better or worse: Better, but only marginally.

What’s different: RM is the only doll that didn’t have a close-up with its face fully towards the camera. Suspicious. That being said, not much is different. A little less volume in the hair, but excess volume wasn’t really this doll’s problem.

What’s the same: That weirdly flat face that sits on the wrong side of the uncanny valley for me.

Better or worse: Neither. RM’s  pretty much the same.

What’s different: Volume has been taken off the sides and back of the hair. It creates a less rounded appearance, and overall, I think the vibe is much more masculine. J-Hope no longer looks like photos of my grandmother from the ’60s. From the front, the chunkier curled bang looks better than the original spit-curl thing. From the side, I’m still not sold.

What’s the same: His face is unchanged, but looking at the higher quality photos, I realized that the upturn of his mouth is not part of the mold. It’s achieved with paint, so it’s the corners of his mouth don’t quite meet up. It’s a little weird (especially if you stare at it for a long time), but other than watching doll repainting videos on YouTube, I know nothing about doll design. Maybe this is common practice.

Better or worse: Better, but that mouth raises some questions.

What’s different: The helmet is gone! Mostly. It still looks nothing like Jimin’s hair in the “Idol” music video, but Mattel took away a lot of the excess volume. The forehead curl is also gone, which is probably for the best. He now has a very severe sideburn, but there are worse things in the world. Maybe it’s the photos, but the eye makeup looks a little lighter now.

What’s the same: That Jimin pout is still on point.

Better or worse: Much better.

What’s different: Extra volume was the running theme of my original assessment, and the running theme of this post is less volume. Kookie’s side wing action is toned down but definitely still present. That’s really the only difference; I guess Mattel knew they hadn’t screwed this one up too badly.

What’s the same: Pretty much everything.

One thought on “Let’s Revisit the BTS Mattel Dolls”